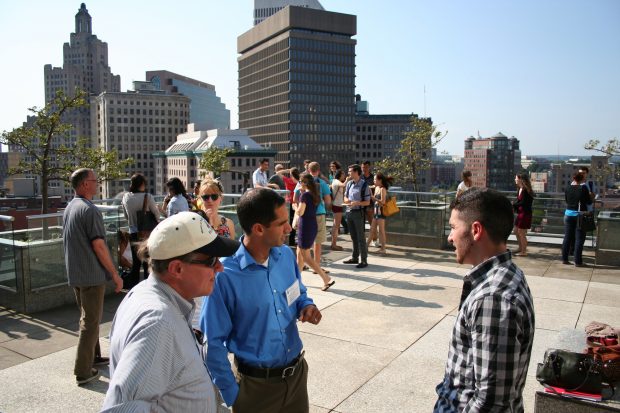 Since graduating with a ScM in  biostatistics at Brown in 2006, Briggs continued on to pursue his PhD in epidemiology at the University of California, Berkeley, where his research focused on characterizing the genetic component of rheumatoid arthritis and multiple sclerosis. In 2010, he was awarded a National Multiple Sclerosis Society Postdoctoral fellowship to investigate gene-environment relationships associated with MS risk. Upon completion of his fellowship, Briggs was recruited to Case Western Reserve University as an assistant professor in the department of epidemiology and biostatistics in the School of Medicine. His current research focuses on the molecular difference in mesenchymal stem cells between  MS patients and healthy individuals,  and investigating exogenous factors influencing MS progression. Currently, Sharron Chakkalackal is enjoying the communication and relationship management involved in  her role as a Stakeholder Engagement Advisor at the Ontario Ministry of Health and Long-Term Care. The past two years have afforded her the opportunity to travel around Ontario and hear the concerns of health service providers (hospital and community care) within the fiscal constraints and reform that has taken place there.

Chakkalackal professional interests include research, policy, evaluation, and implementation to improve the mental health system. A few years ago, she managed an eight-site research project collecting data and forming research from local hospitals and health centers in Toronto and Montreal. Prior to working at the Hospital for Sick Children as a Manager, she consulted on a similar project in the USA. At the Institute for Community Health in Cambridge, Massachusetts, funded by Harvard University, she sought to address issues of health care access for non-insured and non-status populations. After graduation in May 2014 with her MPH, Estefany Flores-Cortez returned to Hope of Life (HOL) in rural Zacapa, Guatemala with a mentee from East Greenwhich High School, Wei Li, to conduct a week-long Women’s Health Clinic. The women at HOL are rescued from homelessness and/or domestic abuse, and many have never received any type of women’s health care. Their children, who are often malnourished, receive care and treatment. However, due to the lack of resources and staff, many of the women’s health issues are not addressed (mental health/gynecological care, etc.). Flores-Cortez interest in public health research and women’s health has motivated her to pursue a nursing degree. She was recently accepted into Columbia University School of Nursing in their Nurse Midwifery program. She hopes to someday be a clinician researcher who provides and promotes quality health care to women near and far.

After working for more than seven years as an Analyst and Senior Analyst at UMass Memorial Health Care in Worcester, MA, Alan Krinsky returned to the Rhode Island health care community in November 2014 as the Health Analytics Manager for the East Bay Community Action Program (EBCAP). EBCAPruns two federally-qualified health centers and many programs, serving the entire East Bay, from East Providence to Newport. Krinsky served on the Board  of the Rhode Island Public Health Association from 2006-2010, and looks forward to getting re-involved in public health and health care in Rhode Island. He lives with his family in Providence, RI and can be contacted at adkrinsky@ netzero.net.

Marc Manseau completed his medical training in June 2014 with a fellowship in public psychiatry at Columbia University. He then started a job as an attending psychiatrist in the Bellevue Hospital Outpatient Psychiatry Clinic and clinical assistant professor of psychiatry at the NYU School of Medicine. In addition to seeing patients and supervising residents, his role includes some research on better managing first episodes of psychosis. He expects his work with people who are early in their psychotic illness to expand soon, both with continued research as well as new clinical/program work. For instance, Manseau will soon be the psychiatrist for a new state-funded program opening at Bellevue, aimed at intervening early and intensively amongst people who have had a first episode of psychosis, with the intention of improving long-term psychosocial and clinical outcomes. He has also been working with the Preventive Psychiatry Committee of the Group for the Advancement of Psychiatry (a psychiatric think tank) on multiple publications about the social determinants of mental health. His committee recently published a book on the topic, and he wrote the chapter on inequality, poverty, and neighborhood deprivation. Marc plans to continue writing on topics relevant to the intersection of public health and mental health, including a few upcoming publications on cannabinoids and psychosis, including the new epidemic of synthetic cannabinoids (eg., K2 and “spice”). Rachel Scagos graduated with her MPH in May 2014. Due to her husband’s job relocation, she moved from RI to Virginia Beach, VA and began working at Operation Smile last fall as the Medical Oversight Coordinator. Operation Smile is an international children’s medical charity that performs safe, effective cleft lip and cleft palate surgery, and delivers postoperative and ongoing medical therapies to children in low and middle income countries. At Operation Smile, Scagos works on a variety of projects including the implementation and testing of new electronic health record (EHR) system, quality assurance audits and initiatives, and analysis of medical incidents and surgical outcomes. Operation Smile is the only organization of its kind to be tackling the challenge of developing an EHR system that can be used by our global foundations in multiple countries. In November 2014, she was fortunate enough to go on her first medical mission to Hanoi, Vietnam, where she helped implement Operation Smile’s first pilot test of full electronic screening using the new EHR system. Their team in Hanoi screened almost 300 potential patients and performed surgery on 116 patients. It was an incredible experience for her to be a part of such an amazing organization and team and to witness the impact that her work has on the lives of children and families around the world.

Jiachen Zhou obtained his PhD in epidemiology in 2013 and MPH in 2010, both from the Brown University School of Public Health. He currently works as a Senior Clinical Data Scientist at Royal Philips, the Dutch electronics giant. His team, located near Baltimore’s Inner Harbor, focuses on redefining health care through innovation in telehealth. His daily work includes the development of clinical process and outcomes-based quality benchmark reports, guiding development of clinical decision support tools and product design decisions, managing the world’s largest electronic clinical database of critically ill patients, and supporting internal and external research activities, as well as development of algorithms for stand-alone clinical decision support tools. Sundstrom is an assistant professor of communication and public health at the College of Charleston in Charleston, S.C. She is also a faculty affiliate in the Women’s and Gender Studies program and a member of the graduate faculty at the University of Charleston, South Carolina. Her research interests include health communication, social marketing, and women’s health. She teaches undergraduate and graduate courses in health communication, social marketing, and public health. Sundstrom also serves as an adjunct professor for the Brown University School of Professional Studies, co-teaching the summer course, “Understanding the Nation’s Health,” an introduction to public health for high school students. She also continues to consult in strategic health communication. Sundstrom’s long-term research goal is to raise the consciousness of women and empower them to engage in informed decision-making through community- based collective action. Sundstrom continues to collaborate with mentors and researchers at Brown University and Women & Infants Hospital in Providence, Rhode Island. A recent research  project was funded by the Brown University Healthy Communities Initiative. This qualitative research project gathered opinions and insights from mothers of newborns to identify health concerns, preferred communication channels, effective messages, and current social marketing campaigns targeting health issues. Catherine has settled into her routine in Boston, and is enjoying her work as a project manager at Mini-Sentinel. Her company conducts post-marketing drug and vaccine surveillance, and she works closely with the team developing analytic methods and tools. Every day brings a new question, a new challenge, and a new chance to make decisions (or facilitate making decisions) in a field she has grown deeply attached to.

Want to be included in the next alumni update? Send an update and picture to public_health@brown.edu!