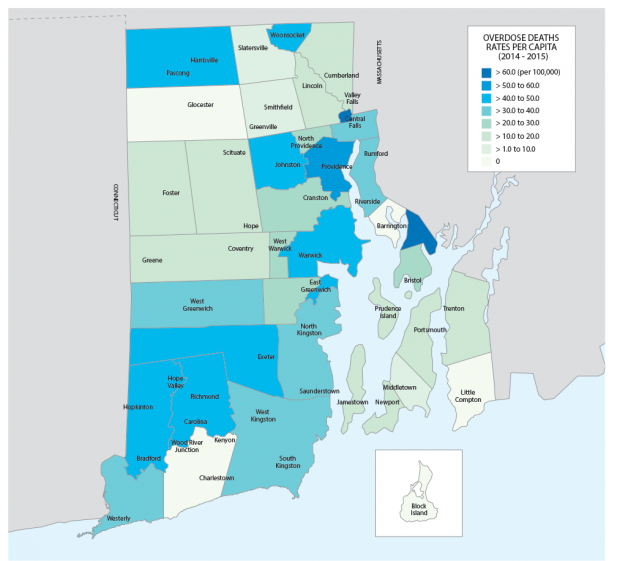 The statistics are startling. In 2014, 239 people in RI lost their lives to overdose, more than the number of homicides, motor vehicle deaths, and suicides combined. The problems of opioid dependence and accidental drug overdose have been growing for some time. And growing in direct relation to a dramatic increase in the amount of opioids prescribed. According to the National Institute on Drug Abuse, the number of unintentional overdose deaths from prescription pain relievers has skyrocketed, more than quadrupling since 1999 in the United States. The State of Rhode Island has been one of the hardest hit. In 2013, Rhode Island had the highest rate of drug overdose in  New England.

In August of last year, Governor Gina Raimondo responded to this crisis. The Governor’s Overdose Prevention and Intervention Task Force was established by executive order and charged with delivering a plan of action. The Task Force has been closely advised by three experts from the Brown University School of Public Health. Drs. Jody Rich, Traci Green, and Brandon Marshall, were co-authors of  a report that calls for a four-pronged strategy to address the crises.

The report, “Rhode Island’s Strategic Plan on Addiction and Overdose,” presents a grim picture, not only of the death toll from opioid overdoses, but of the size of the population with untreated addictions. The goal of the four-part plan  is to reduce opioid overdose deaths in Rhode Island by one-third within three years.

In 2014, 239 people in RI lost their lives to overdose, more than the number of homicides, motor vehicle deaths, and suicides combined.

The four prongs the Report centers its recommendations around are treatment, rescue, prevention, and recovery. Treatment requires making medication therapy for opioid addiction more widely available. Buprenorphine, a substitute opioid known by its trade name Suboxone, is available from fewer than 75 physicians in Rhode Island.  Dr. Nicole Alexander-Scott MPH’11, director of the RI Department of Health, has said that the state should have about 750 buprenorphine prescribers. According to Brandon Marshall, Assistant Professor of Epidemiology, “We need to help providers understand how opioid addiction can be treated effectively in the primary care setting.” In addition to increasing the number of doctors prescribing buprenorphine, and the number of patients they treat, the Report also recommends the development of medication-assisted  treatment delivery systems at emergency departments, hospitals, clinics, and drug treatment programs, as well as increased cross-institutional collaboration.

The rescue component of the recommendations calls for increasing the availability of naloxone. Naloxone saves lives by reversing the severe respiratory depression caused by opioids and can be administered by laypeople trained to identify and respond to overdose. Furthermore, laws, policies, and communication strategies that encourage people to seek help in an overdose emergency are a critical part of the rescue strategy.

In order to prevent opioid addiction in the first place, the report recommends keeping closer track of the prescribing and dispensing of certain prescription medications. Prevention efforts including educating physicians, clinics, and pharmacists on safer prescribing and providing aggressive safety messaging to patients are also recommended.

The Report’s recovery strategy includes a large-scale expansion of recovery coach reach and capacity. The State’s peer recovery services have not kept pace with the opioid epidemic and the report recommends doubling the number of recovery coaches statewide.

The plan also recommends creating an online dashboard to keep the public up to date with the group’s progress.  Marshall reports that, “Rhode Island was successful in obtaining a new grant from the Centers for Disease Control (CDC). We were one of several states to receive this funding to identify new strategies to help prevent overdose deaths. That grant will fund the Dashboard, for example, an online platform which we’ll use to track our successes. So there is committed funding already to implement some of the recommendations.”

There is a long way to go however. Experts from the School of Public Health have helped to lay a foundation with their plan to address Rhode Island’s growing opioid crisis and to measure the success of their ambitious goals moving forward.