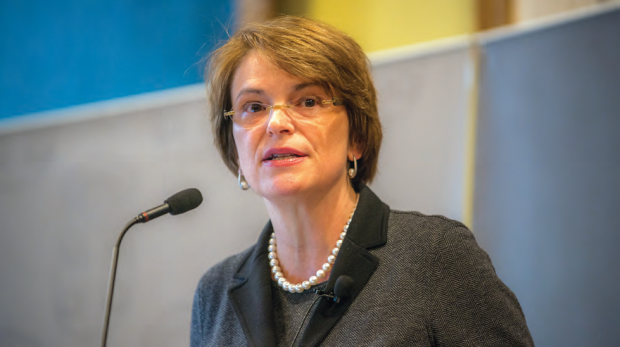 When people begin and then continue life with poorer health, less income and wealth, higher degrees of stress, and less access to education and health care, their health itself will suffer, and that in turn can make improving any of their other disadvantages harder. The statistical evidence shows that this complex interplay of difficulties dispropor-tionately affects black people and underlies the significant racial disparities evident in health quality in the United States, said Brown University President Christina Paxson, delivering the 2015 Levinger Lecture Monday, Nov. 16, 2015.

“These gaps are large and they are deeply disturbing,” said Paxson, an economist who has studied and taught about the issue for years.

“Now, when this nation is so focused on issues of structural racism and discrimination, it seems especially right to give a renewed emphasis on racial disparities in health,” she said to an audience that crowded in Sayles Hall for a talk entitled, “Unpacking Racial Health Disparities.”

Paxson’s research focuses on economic development and health, with specific attention to the relationship between economic status and health over the life course. She shared the lecture’s stage with Dr. Nicole Alexander-Scott, director of the Rhode Island Department of Health, who said that addressing the social and environmental determinants of health are necessary to reduce disparities. Doing so is among her top three priorities in office, Alexander-Scott said.

Many dimensions of disparity

The foundation of Paxson’s remarks was her presentation  of data illustrating that the differences between blacks and whites in the United States occur across many dimensions that economists consider in models of how health is determined. On average, black people are more likely to start life with low birth weight and poorer overall health quality. They are less likely to earn a college degree, and make less money on average. The average black household has starkly less total wealth than the average white household — $11,000 vs. $190,000 in 2013. By many measures, black people receive worse health care services than whites do.

At the same time, the data show that black people had higher mortality and infant mortality rates than any other U.S. ethnic group in 2005. Black people were also more likely to report worse overall health, and higher rates of specific conditions such as arthritis, heart conditions, stroke, high blood pressure, diabetes, and breathing disorders. Moreover, they reported in the National Health Interview Study that they were more likely to be limited in working because of these conditions.

“And there were different reasons for this,” Paxson said, listing “earlier onset of conditions; less ability to control the progression of the disease because of poorer quality medical care or worse environmental factors; [and] less income or wealth — and we saw the wealth gaps — that are needed to buffer the effects of the disease or the condition on the  quality of life.”

One effect evident in the data is that black people often report reaching levels of ill health quality — “morbidity” — about a decade before white people do. Yet, Paxson said, when people can’t work in their 50s because of poor health, they miss out on the prime earning years when they need to save for retirement.

There isn’t one lone factor that can account for the disparities in health. Paxson crunched numbers to find that even if blacks had the same rate of college education as whites,  the disparities would narrow, but still would not close completely. It’s also a problem that can’t be solved solely  by the expansion of health insurance provided by the Affordable Care Act.

“When you look at the data, you look at the studies, I come away with the sense that this is just a complex mix of lower wealth, higher stress, greater discrimination, and lower economic opportunities,” Paxson said. “And this mix all feeds in to a life course of disadvantage that cumulates in higher morbidity and eventually higher mortality.”

The cumulative nature of the negative interplay of poverty, discrimination, less education, and lower health quality requires early and sustained intervention, Paxson said. Improving maternal and neonatal health, improving early child development and education, and treating chronic conditions such as high-blood pressure and obesity that lead to larger health problems are all important examples, but so are ending educational and economic disparities throughout life.

“I don’t think we are really going to solve this problem until we dismantle structural barriers to social and economic opportunity,” she said. “That’s a really big order but it’s one we really need to focus on.”

Alexander-Scott said racial disparities in Rhode Island require an emphasis not only on the delivery of health care in the hospital or the doctor’s office, but also on the living conditions of people in the community as a whole. Those are the social and environmental determinants of health.

“Now, when this nation is so focused on issues of structural racism and  discrimination, it seems especially right to give a renewed emphasis on racial disparities in health.”

“When you give them that script, do you know if they have the transportation to get them to the pharmacy to pick it up?” said Alexander-Scott, an alumna who is also an assistant professor in the Alpert Medical School and the School of Public Health. “Do they have the electricity to refrigerate the medication that we have given them the  script for?”

Alexander-Scott noted that the United States spends  much more than other countries on health and gets only middle-of-the-pack results in life expectancy. Meanwhile, the country spends much less than others on social  support services.