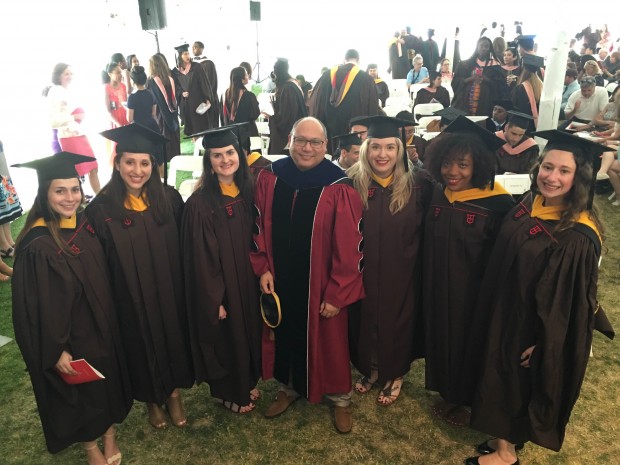 One hundred forty-two degrees were awarded in Public Health fields during Commencement 2016.

That’s a record high and great indication of the growth of the School of Public Health and of interest in the field of public health at Brown. During her opening remarks of the Public Health Commencement ceremony, where 74 undergraduate concentrators received diplomas and 68 graduate degrees were acknowledged, Dean of the School, Terrie Fox Wetle, recalled the earliest days of public health at Brown when Commencement ceremonies were held in a conference room on the second floor of the Hillel. This year, the graduating students, their friends and families, and the excitement they generated on this very special day were hardly contained by a large tent on Simmons Quad.

“This is a wonderful opportunity to recognize the persistence, hard work, and tremendous achievements of our graduates,” Dean Wetle said. “Having accompanied you on this journey, I know the sacrifices you have made.” The Dean also recognized the members of the students’ support networks. “You have provided love, encouragement, and support during this sometimes arduous journey. You may have even written a check or two. You are the mothers and fathers, husbands and wives, partners and friends, and the chosen families of these future leaders in Public Health.”

The Dean also introduced the three representatives of Brown University’s Corporation who were on hand to present diplomas to the undergraduates. Charles M. Rosenthal is a member of the Emeriti Executive Committee of the Brown Corporation; trustee emerita Susan Adler Kaplan who is the former chair of the Corporation Emeriti Executive Committee; and Mr. Harold Bailey Jr., trustee emeritus, co-chair of the Alumni of Color Initiative. After the awarding of the undergraduate degrees in Public Health and Statistics, the inaugural winners of the Undergraduate Student Excellence Awards were presented along with the Public Health Graduate Awards. The Undergraduate award recipients were; Alexandra Sepolen, Sarah Peters, Morayo Akande, Jessica Solis, and Tammy Jiang. The Master’s Public Health Impact Award was presented to Elizabeth Bunzli (MPH) and the Doctoral Public Health Impact Award was awarded to Laura Keohane (HSR).

The graduate students, who received their diplomas during earlier ceremonies, were acknowledged and presented with gifts from their respective graduate program directors. Degrees were awarded this year to Master’s students in Behavioral and Social Health Sciences, Biostatistics, Epidemiology, Clinical and Translational Research, and the Master’s in Public Health. Doctoral degrees were awarded in Biostatistics, Epidemiology, and Health Services Research.

Dean Wetle described it as a “glorious day to acknowledge the many achievements of these amazing and talented graduates—and to help launch them on their paths to become leaders in improving population health.” She thanked the faculty “who have educated, mentored and sometimes nudged and nagged these graduates to completion of their degrees,” after which rising to acknowledge unrestrained applause. Dean Wetle closed with well wishes and by thanking everyone in attendance. “Congratulations again to all the outstanding graduates in the class of 2016!”