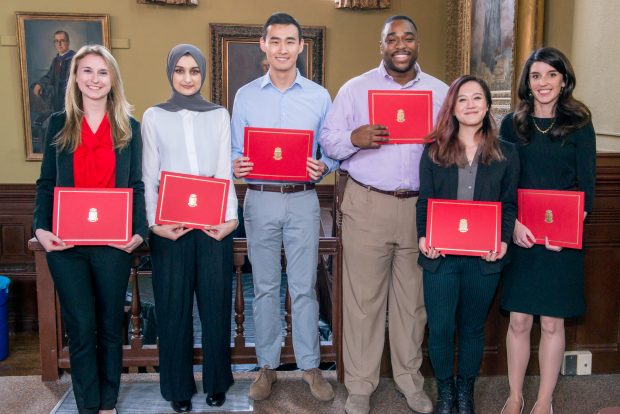 Sayles Hall was filled with 82 public health posters on Thursday, April 13, 2017 – the largest number of posters ever presented during Research Day. The researchers responsible were on hand, answering the questions of judges, colleagues, and friends. After the public viewing, Dean Fox Wetle, presented awards for the best posters.

Best Poster, Kelsey Anderson, for The Impact of Social Support and Partner Relationship Dynamics on Engagement in HIV Care and Antiretroviral Treatment
Runner-up, Anita Yun for Interactions of Genetic Variants and Nutrition on Obesity and Cardiovascular Disease Risk factors in Samoans

Best Poster, Mingyan Shan for More than a Meal: The Effects of Meals on Wheels Programs on Medicare Beneficiary’s Healthcare Utilization and Status
Runner-up, Rachel Denlinger for Acceptability of a Reduced Nicotine Product Standard for Cigarettes among Smokers Provided with Reduced Nicotine Dean Wetle also acknowledged the winners of the 2017 Dean’s Awards, which are nominated by the student body. The award for Excellence in Classroom Teaching in Public Health was presented to David Williams, PhD, Associate Professor of Behavioral and Social Sciences. The award for Excellence in Mentoring in Public Health was awarded to Simin Liu, MD, PhD, Professor of Epidemiology.