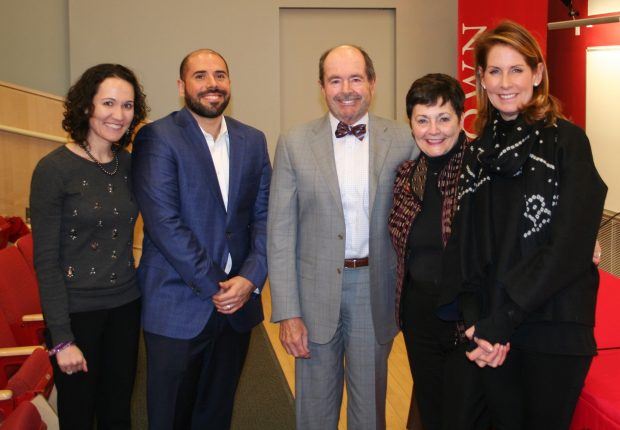 These were the questions that appeared at the beginning of the HBO documentary Risky Drinking, which was screened in Metcalf Auditorium on March 13th. The documentary was produced by Perri Peltz ’82, P’19 who was in attendance to present her thought-provoking film. This event was part of Brain Week RI and was sponsored by the Brown University School of Public Health, the Center for Alcohol and Addiction Studies, the RI Department of Health, and the Department of Behavioral Healthcare, Developmental Disabilities and Hospitals (BHDDH).

Nearly 70% of American adults drink alcohol, while 27% of adults binge drink, and 7% engage in heavy alcohol use. It is those whose drinking is severe and has become a problem, considered to have Alcohol Use Disorder, who are the subject of this film. Viewers were introduced to Kenzie, a young professional who binge drinks on the weekend; Mike, a father whose drinking is affecting his relationship with his son and wife; Noel, a mother who had recently missed her daughter’s graduation due to her drinking; and Neal, a grandfather who is physically dependent on alcohol and whose support system is at the end of its rope. The film follows these four individuals through their struggles in order to illustrate the varying degrees of alcohol use disorder, from habitual binge drinking to life-threatening consumption. Often uncomfortable to watch, viewers were exposed to the chronic nature of alcohol use disorder; the film’s subjects regularly tried to moderate their drinking but often were unable to sustain healthier behaviors.

After the film, students, faculty members, and community members participated in a panel discussion with leading experts. Led by Peter Monti, director of the Center for Alcohol and Addiction Studies (CAAS) and featuring CAAS faculty members Sara Becker, Kate Carey, and Mark Celio, the panel had a wide-ranging conversation on the challenges of treating alcohol use disorder and preventing moderate drinkers, especially young people, from progressing to this state. One of the most visceral themes in the film was the chronic nature of alcohol use disorder. Monti explained that this has led researchers at Brown and others to look to other chronic diseases, such as diabetes, for longer-term treatment strategies.

The panel quickly evolved into a dialogue with audience members, who brought perspectives from the community to the conversation. Janine O’Donnell MPH ’16, now a member of the Rhode Island Department of Behavioral Healthcare, Developmental Disabilities and Hospitals, commented that those in her organization had started referring to ‘relapses’ as ‘reoccurring symptoms,’ which removes the stigma from relapse and better represents alcohol use disorder as a chronic disease. Dr. Becker also reflected on the stigmatizing language that is often tied to problem alcohol use. “We don’t call those with an eating disorder ‘Food Abusers,’” said Becker, highlighting language that suggests alcohol and drug users are seen as more personally accountable for their behavior.

Others in the audience brought up race, ethnicity, and socioeconomic status as important factors contributing to treatment access. Becker, whose research focuses on substance use treatment in adolescents from disadvantaged backgrounds, highlighted that low socioeconomic status adds another level of difficulty in accessing treatment. The four subjects of the film, all white and relatively affluent, had substantial problems in reducing their drinking. Add financial difficulties that reduce access to treatment, and you can see how difficult it is for disadvantaged populations to address this problem, commented Becker. The School of Public Health is committed to supporting events that communicate our research to those in the larger Brown and Providence community.