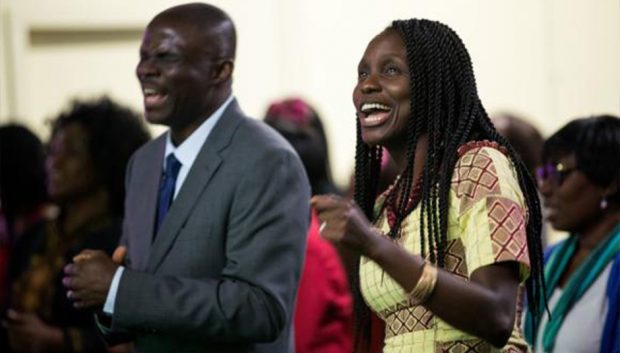 An estimated 13,100 immigrants from sub-Saharan Africa live in Providence County.

In 2011, the medical research assistant and phlebotomist moved to Rhode Island from Kentucky to earn a master’s degree in public health at Brown University. The move brought the young Ghana native into Providence County’s community of more than 13,000 fellow immigrants from sub-Saharan Africa.

Before enrolling at Brown, Adu-Boahene spent more than two years working at Women & Infants Hospital. Her experience as a health care worker and an immigrant, combined with what she often observed among her friends and neighbors at the Empowerment Temple of the International Central Gospel Church in Pawtucket, made it apparent that for many people, moving from West Africa to New England brings significant barriers to accessing health care. With the encouragement of her pastor, she helped to organize church health ministry programs, such as quarterly health fairs with screenings and educational events. She resolved to start a more permanent clinic in Pawtucket and, as a student at Brown, dedicated her thesis work to conducting a health needs assessment within the community.

A summary of her results was published in the Rhode Island Medical Journal. The paper provides a rare quantitative and qualitative assessment of health and health access in a sampling of Rhode Island’s large African immigrant community. A common theme in the data is that, despite a prevalence of developing chronic health problems, many immigrants don’t seek, and don’t know how to seek, care.

“When we emigrate to the U.S., we have little background knowledge of preventive medicine,” Adu-Boahene said. “But there are real needs. Even if we do seek care, we have limited information on how to access the U.S. healthcare system.”

Adu-Boahene recruited and surveyed 101 immigrants from Ghana, Liberia and Nigeria to amass quantitative data, and also interviewed a clinical pharmacist, five local physicians and three clergy members who serve the community to gain a deeper, more qualitative understanding than numbers alone can produce.

Adu-Boahene’s sample consisted of a young (75 percent under age 44) and well-educated (83 percent with at least some college) population with a high rate of employment (90 percent). More than half had become either U.S. citizens or permanent residents. Three out of four participants had health insurance.

Even though nearly half reported a chronic health problem, the group was somewhat disconnected from routine care. The sample revealed a variety of chronic ailments. Topping the list were joint and back pain, high blood pressure, diabetes and being overweight. They also reported high levels of stress.

“The culture shock is huge,” Adu-Boahene said. “It’s fast-paced over here, but we’re so laid back where we come from. And we are very communal — in the U.S., it’s ‘each man for himself.’”

The interviews with doctors and pastors backed up the insight that many immigrants don’t seek the preventive care that could prevent or address some chronic ailments.

According to co-author Dr. Kwame Dapaah-Afriyie, clinical associate professor of medicine at the Warren Alpert Medical School, “this was seen in part as a function of unfamiliarity with preventive care and of concern about cost.”

Since members of the community aren’t rushing to the clinic, Adu-Boahene has brought it to them. Since graduating from Brown in May 2016, she’s realized her vision of establishing the WTL Health Clinic, Inc., a free clinic initiative in Pawtucket (WTL stands for “The Way, The Truth and The Life”). The clinic offers free primary care services every Saturday and holds health seminars on Sundays focused on diabetes, heart health, and other chronic health challenges identified by Adu-Boahene’s health needs assessment.

Having documented her community’s needs as a student, Adu-Boahene is now working to meet them.