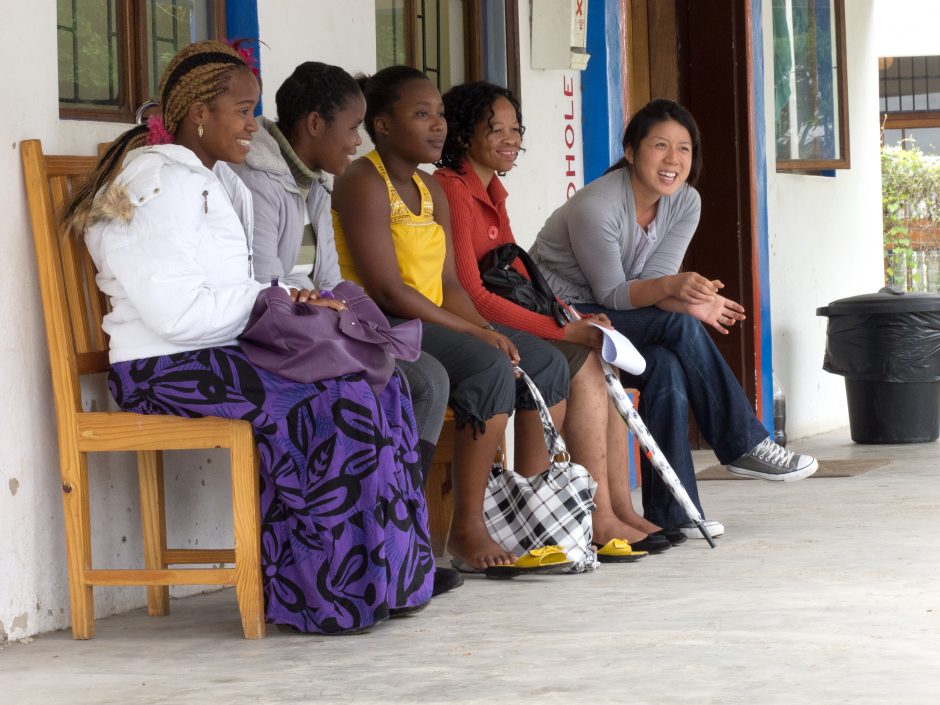 When it comes to establishing a network of trust, Brown researchers know that community building is essential.

So-called “helicopter research,” “parachute research,” or “drive-by research” occurs when researchers drop in to communities, and then quickly leave. Members of already marginalized communities can be made to feel used, intimidated, and even suspicious of researchers’ goals. Researchers in the Brown University School of Public Health take a different approach. They know that when community members are engaged in the process, researchers not only gain their trust, but are able to gain deeper understanding of prevailing health behaviors and formulate more nuanced approaches to improving them.

Making long-lasting commitments to the communities in which they work is a hallmark of the global health researchers in the School of Public Health. Their work is collaborative by nature and often community-based, relying on the buy-in and input of community members. While it often takes years to build community trust and understanding, partnered approaches can lead to innovative research. One example is Caroline Kuo’s project applying a resilience-oriented, family-based approach to preventing HIV among South African adolescents. Professor Stephen McGarvey is an example of a faculty member who has dedicated his career to a particular people. What he has learned benefits the Samoan people directly, while it informs our larger understanding of obesity trends around the world. Here are snapshots of some of the current global research projects now underway.

Long-standing collaborations are needed to build resilient capacity in developing countries with scarce resources. The School’s commitment to training local public health practitioners and researchers around the world is helping to ensure improved health outcomes for future populations.

Brown University Ukraine Collaboration
HIV/AIDS is a crisis in Ukraine. Many of the infected are young adults, who, over the next ten years will become ill with AIDS and TB, placing tremendous stress on Ukraine’s already strained healthcare system. The Brown University Ukraine Collaboration, now in its sixth year, is a joint venture between the Brown University Center for AIDS Research and HIV health and service providers in Ukraine through the support of the Elena Pinchuk ANTIAIDS Foundation. Led at Brown by Professor Timothy Flanigan, the program aims to foster effective educational collaborations in the areas of public health with emphasis on improved care and prevention of diseases that impact marginalized communities, particularly HIV, TB, and hepatitis C.

The NAMBARI Program: Moi/Brown Partnership for Biostatistical Training in HIV
The NAMBARI program responds to the critical need for capacity building in biostatistics and other quantitative sciences to support the enormous volume of HIV and health-related research taking place at Moi University, in Eldoret, Kenya. Expert statistical analysis is fundamental to generating high-quality research that informs evidence-based practices used to combat HIV. The NAMBARI program addresses the need for more highly trained Kenyan biostatisticians by expanding research and curricular capacity in biostatistics and advanced quantitative methods at Moi University, laying the foundation for development and ongoing training of a sustainable critical mass of faculty and staff scientists in this field. NAMBARI also provides graduate-level training in biostatistics at Brown University to highly qualified Kenyan candidates from Moi University, along with workshops and faculty development in Kenya. The program is led by Principal Investigator Professor Joseph Hogan at Brown.

SASH: The South African Social Science and HIV Programme
A joint project of the University of Cape Town, South Africa and Brown University, SASH is led by Professor Mark Lurie at Brown. The program enhances infrastructure and research investments at the University of Cape Town’s School of Public Health and Family Medicine. Key to these efforts are the training and mentoring of SASH fellows, young South African leaders who are learning to apply social science methods to better understand the HIV epidemic in sub-Saharan Africa. These investments will develop a new generation of rigorously trained HIV social scientists to address research questions of social science and public health importance, and to foster a culture of excellence in social science research on HIV/AIDS.

The South Africa Addiction Technology Transfer Center
The South Africa Addiction Technology Transfer Center (ATTC) reflects a strategic international partnership between the New England ATTC, one of the longest continuously operating ATTCs in the US, and the University of Cape Town, the oldest and highest-ranked University in South Africa. Its primary focus is to develop and strengthen South Africa’s national workforce to provide evidence-based integrated substance use disorder, mental health, and HIV care. Funded by a $2.5 million dollar grant from the Substance Abuse and Mental Health Services Administration, the south Africa ATTC is led by Professors Caroline Kou and Sara Becker at Brown.

HIV/TB Training Partnership with the University of Ghana
With support from the Fogarty International Center of the National Institutes of Health, Brown University professors are working with colleagues in Ghana to build the research capacity needed to address the deadly co-epidemics of HIV and tuberculosis.  This multidisciplinary research training program will train a cadre of Ghanaian scientists and researchers by supporting PhD degree candidates, master’s level, and postdoctoral trainees at both Brown and the University of Ghana.  These trainees will ultimately develop independent, high-quality research to address yet unanswered and emerging questions that could transform TB prevention and care programs for people living with HIV in Ghana. The program is led by principal investigator Dr. Awewura Kwara, professor of medicine in the Alpert Medical School at Brown University.

University of the Philippines
The Philippines is experiencing one of the fastest growing HIV epidemics in the world, yet the country lacks the research infrastructure to mobilize a strong evidence-based response. Brown is helping to build capacity for HIV behavioral-social science research in the Philippines by training HIV scientists who can respond to the epidemic. The project supports students from the Philippines in Master’s and doctoral training at the Brown University School of Public Health. Specific training will focus on HIV prevention and treatment in key populations, such as sexual and gender minorities. Brown will also host visiting scientists and postdoctoral fellows from the University of the Philippines as well as hosting annual workshops in Manila to build a curricular infrastructure related to HIV behavioral-social science research. This project is led by principal investigator Professor Don Operario with support from the Fogarty International Center of the National Institutes of Health.