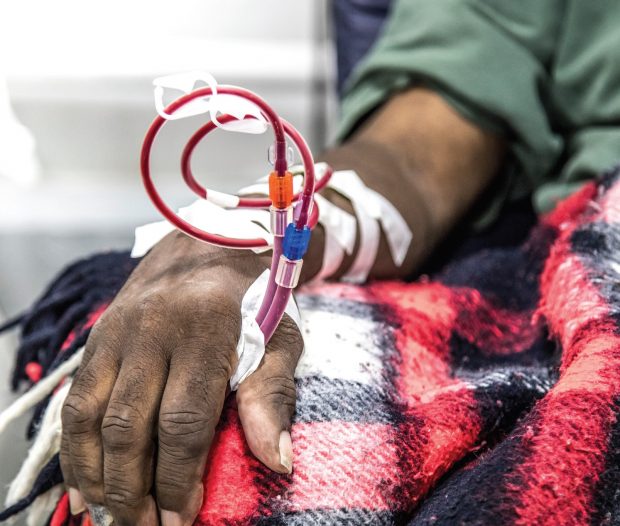 A study finds that fewer patients with end-stage kidney disease died within a year of starting dialysis in states that expanded Medicaid coverage in the wake of the Affordable Care Act.

IN THE FIRST THREE YEARS of Medicaid expansion due to the Affordable Care Act (ACA), the number of patients with end-stage kidney disease who died within a year of starting dialysis decreased in states that expanded Medicaid compared to non-expansion states, research finds.

“To my knowledge, this is the first study to find an association between Medicaid expansion under the ACA and lower death rates in adults,” said Dr. Amal Trivedi (right), senior author and associate professor of health services, policy, and practice. “Prior research on the effects of Medicaid expansion have generally found that expansion is associated with substantial gains in coverage, access to care, use of preventive health services, and in some studies, better self-rated health.”

For the study, published in the Journal of the American Medical Association, Trivedi and colleagues tracked more than 230,000 non-elderly patients with end-stage renal disease between 2011 and 2017. In January 2014, 25 states and the District of Columbia extended Medicaid to non-elderly residents with incomes at or below 138 percent of the poverty level, while 25 states did not (though eight more have expanded Medicaid since then).

In Medicaid expansion states, the number of patients who died within the first year of beginning dialysis, decreased from 6.9 percent prior to expansion to 6.1 percent after expansion, a total reduction of 0.8 percentage points. In non-expansion states, the mortality rate was 7 percent from January 2011 to January 2014 (prior to ACA) and 6.8 percent from January 2014 to March 2017, a reduction of 0.2 percentage points.

“This is the first study to find an association between Medicaid expansion under the ACA and lower death rates in adults,”

Not only did the researchers compare death rates before and after expansion, they also compared rates between states that expanded Medicaid and states that did not. This method gave the researchers two layers of comparison—before 2014 versus after and expansion states versus non-expansion states—for determining whether the differences were associated with Medicaid expansion, Trivedi said.

Trivedi says that more research is needed to determine exactly what caused the decrease in deaths, but the study suggests expanded insurance coverage, which provided better access to care, was the key factor in reducing mortality among this group. Medicaid expansion reduced the rate of end-stage renal disease patients without insurance by 4.2 percentage points, primarily through Medicaid coverage.

“Multiple factors not explored in our paper may have contributed to the reduction of mortality among patients with end-stage renal disease,” said Shailender Swaminathan, lead author and an adjunct assistant professor of health services, policy, and practice. “Medicaid may have resulted in better adherence to treatment sessions, normally three times a week, because it eliminated co-payments of about $150 per week. On the other hand, because out-of pocket medical payments were reduced, Medicaid may have also improved patients’ finances, thereby improving health. More research may be essential to unravel this.”

Medicaid expansion also improved pre-dialysis care for kidney disease, as indicated by the surgical placement of a fistula or graft before beginning dialysis, Trivedi said. Fistulas and grafts—two methods for accessing the bloodstream for dialysis—are less likely to become infected than temporary venous catheters, and in expansion states there was an increase of 2.3 percentage points in the number of patients beginning dialysis with a fistula or graft.

“We’re studying a central question in health policy: To what extent does expanded health coverage save lives?”

The study also found that Black patients and patients between the ages of 19 and 44 had larger decreases in mortality rates, by 1.4 percentage points and 1.1 percentage points respectively. Trivedi said this is likely because these groups traditionally had lower rates of insurance. As Blacks and Hispanics are more likely to develop end-stage kidney disease— 3.5 times and 1.5 times respectively—Trivedi said, “Medicaid expansion in the states that have yet to expand may be a significant strategy to address racial and ethnic health disparities among patients with end-stage renal disease.”

Trivedi would like to monitor the long-term effects of Medicaid expansion on end-stage kidney disease mortality and incidence rates. It is possible that increases in insurance rates due to Medicaid expansion could lead to better recognition, treatment, and management of diabetes and hypertension, the two key underlying causes of kidney disease, ultimately reducing the number of people who develop end-stage renal disease, he said.

“Our study suggests that there are significant mortality reductions in patients with end-stage renal disease, who have substantial medical needs, in the states that expanded Medicaid,” Trivedi said. “We’re studying a central question in health policy: To what extent does expanded health coverage save lives?”

He added that the results may apply beyond patients with kidney disease to others with serious chronic conditions, but more research is needed.

The National Institutes of Health supported this research.