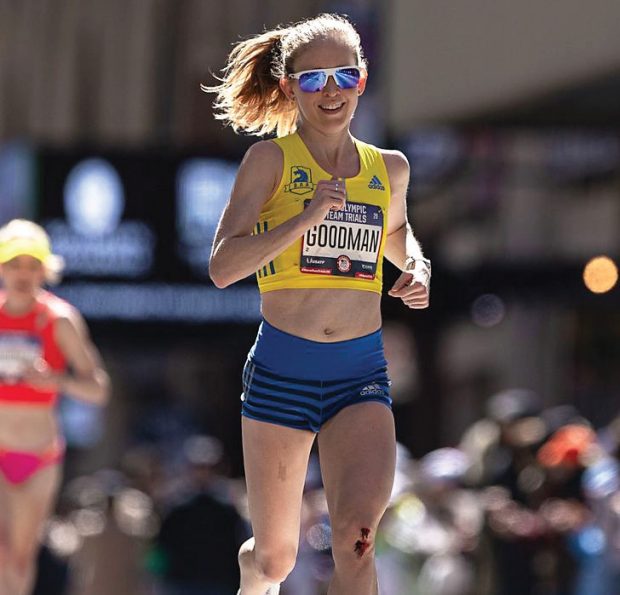 It was her 4th time racing in an Olympic qualifying event. “I was smiling my way to the start of what I felt would be my best marathon yet,” Kaitlin Gregg Goodman, MPH’18, said on Facebook. Then, in the opening half-mile of Atlanta’s March marathon trials, disaster struck.

“In an instant, I was on the ground, in pain. It was terrifying.” With hundreds of racers running past, she was trampled. Bloody and bruised, Kaitlin got back up and continued— fighting her way back into the lead pack, but when the adrenaline wore off around mile 14, afraid of further injury, she left the race and headed to the medical tent.

Kaitlin has been down before. She was running on a Providence street in 2018 when a distracted driver nearly struck her, causing a torn hamstring. She was in the shape of life at the time and had just signed professional contracts with Adidas and the Boston Athletic Association.

Devastated, Kaitlin channeled her anger into “Safe on the Road,” a campaign she launched to help pedestrians and motorists coexist on the nation’s roadways. And she’s using the new platform to reinforce social distancing guidance amid the coronavirus pandemic, urging Americans to stop running in groups. “A little sacrifice now goes a long way to protecting the health of others as well as our ability to run outside,” she recently posted on the Safe on the Road’s Facebook page. Learn more about Kaitlin’s career as a professional runner and coach and as an advocate for safer streets for runners, walkers, and bikers.