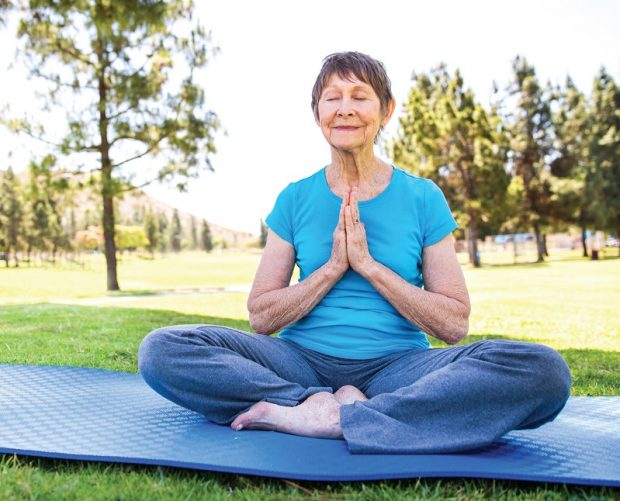 A study led by Professor Eric Loucks, Ph.D., finds that mindfulness could reduce blood pressure by enhancing attention control, emotion regulation and self-awareness of both healthy and unhealthy habits.

As the leading cause of death in both the United States and the world, heart disease claims nearly 18 million lives every year, according to the World Health Organization.

Many of these deaths are due to hypertension, or abnormally high blood pressure, and could be prevented through medication or lifestyle changes such as healthier eating, weight loss and regular exercise — but behavior change is often challenging. That’s where mindfulness may be useful, says Eric Loucks, an associate professor of epidemiology, behavioral and social sciences, and medicine at Brown University.

“We know enough about hypertension that we can theoretically control it in everybody — yet in about half of all people diagnosed, it is still out of control,” said Loucks, lead author of a new study published in PLOS One. “Mindfulness may represent another approach to helping these people bring their blood pressure down, by allowing them to understand what’s happening in their minds and bodies.”

Loucks directs the Mindfulness Center at Brown’s School of Public Health, which aims to help scientists, health care providers and consumers better understand whether particular mindfulness interventions work, for which health concerns and for which patients.

“I hope that these projects will lead to a paradigm shift in terms of the treatment options for people with high blood pressure.”

For the study, Loucks and a team of researchers developed a nine-week customized Mindfulness-Based Blood Pressure Reduction (MB-BP) program for 43 participants with elevated blood pressure and followed up with them after one year. The program aimed to use mindfulness techniques to enhance attention control, emotion regulation and self-awareness of both healthy and unhealthy habits, thereby diminishing some of the risk factors associated with elevated blood pressure — and it appears to have worked, the study shows.

After undergoing mindfulness training, participants exhibited significant improvements in self-regulation skills and significantly reduced blood pressure readings. Participants who had not been adhering to the American Heart Association’s guidelines for salt and alcohol intake and physical activity improved in those areas as well. The positive effects were still present at the one-year follow-up and were most pronounced for participants who enrolled with stage 2 uncontrolled hypertension (i.e., a systolic blood pressure equal to or greater than 140 mmHg). These participants experienced a mean 15.1-mmHg reduction in blood pressure.

The program, Loucks said, was a “deliberately multimodal intervention,” intentionally combining mindfulness training with other strategies used to reduce blood pressure, such as encouraging participants to continue taking prescribed anti-hypertensive medications and educating participants about habits that contribute to elevated blood pressure.

“Future trials could involve a dismantling study, where we would take out some of the health education, for example, and see if mindfulness training still had significant effects,” Loucks said. “That’s certainly something we’re looking at doing in the long term. But mindfulness training is usually designed to be integrated with standard medical care.”

He added that a follow-up study is currently underway: a randomized control trial of the MB-BP program that contains more than 200 participants.

“I hope that these projects will lead to a paradigm shift in terms of the treatment options for people with high blood pressure,” Loucks said.

For people who don’t face challenges in maintaining a healthy blood pressure, MB-BP training may be an effective preventive tool, he added. Within this initial study, more than 80 percent of participants had hypertension (130 systolic over 85 diastolic or higher), while the remainder had elevated blood pressure (at least 120 over 80), and the average participant was 60 years old. But Loucks supports using mindfulness techniques for those across all age groups and blood pressure levels.

“The hope is that if we can start mindfulness training early in life, we can promote a trajectory of healthy aging across the rest of people’s lives,” he said. “That will reduce their chances of getting high blood pressure in the first place.”