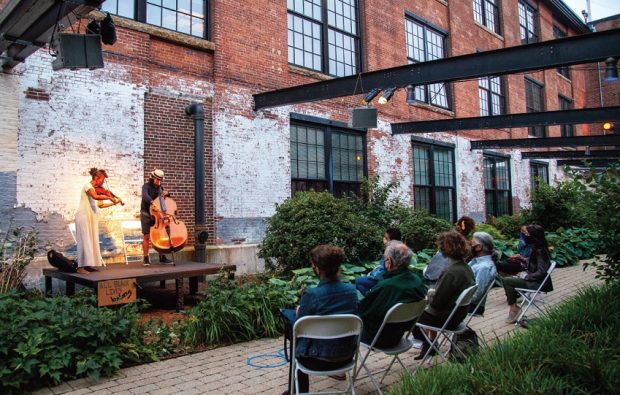 How do you safely hold theater performances during a pandemic?

Inspired by Boccaccio’s 14th-century work about young people trying to escape the Black Death, Olneyville’s Wilbury Theatre Group reinvented theater during COVID-19 in a form that kept the public and the performers safe. Working with epidemiologist Brandon Marshall, the theater was among the first in the country to resume performances amid the pandemic.

Their first step was to remove the theater. With outdoor performances to a distanced audience, Decameron, Providence: New Stories for a New Era was a fourteen-day traveling spectacle held in August featuring dozens of performers across ten different stages on the grounds of the WaterFire Arts Center and the historic American Locomotive Company building.

Josh Short, Artistic Director of the Wilbury Theatre Group, credited Marshall’s guidance with the theater’s ability to meet current best health practices. “His expertise as an epidemiologist gave us the knowledge and the framework necessary to present our work safely,” he said.

Marshall enjoyed the opportunity to flex a different epidemiological muscle. “Thinking through how to create safe venues for audience and artists alike, but one that maintains the magic of live performance, has been challenging,” he said. “The Wilbury Theatre Group tackled the problem head on and has been offering some of the most innovative, inspiring programming I’ve seen in Providence.”