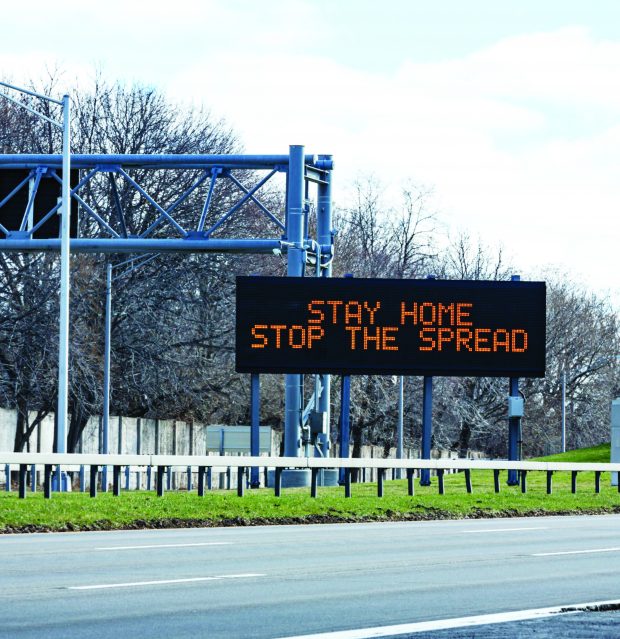 As COVID-19 swept across the nation, most states went into lockdown—new research and state-by-state data suggests that stay-at-home orders helped slow the pandemic significantly.

ACROSS THE GLOBE, COVID-19 has infected more than 33 million people to date and has killed more than one million—and the United States has been hit especially hard. Although the U.S. comprises just 4.2% of the global population, it accounted for approximately 33% of all reported infections by the end of April.

However, most U.S. states eventually imposed stay-at-home orders, and those orders appear to have significantly slowed the spread of the disease for the nation as a whole.

These findings—along with a state-by- state breakdown of how quickly COVID-19 spread before and after lockdown orders—were published in the Journal of Infectious Diseases on August 1.

“Understanding the trajectory of the epidemic in the U.S. is critical, and measuring the impact of stay-at-home orders on epidemic growth offers evidence for current and future COVID-19 control and containment measures,” said Mark Lurie, an associate professor of epidemiology. “While this was not a randomized trial, and therefore we cannot establish causation, what was clear in our study is that stay-at-home orders were significantly associated with slowing epidemic growth rates.”

Lurie was the lead co-author for the study as part of a team of researchers from Brown’s School of Public Health and Warren Alpert School of Medicine.

The study calculated the pandemic doubling time—the amount of time it takes for the number of cases to double—on both a national level and for individual states. An increase in doubling time indicates a slowing pandemic.

Before the effects of widespread lockdowns became apparent—from March 4 until April 4—the national pandemic doubling time was 2.68 days. This doubling time increased significantly, to an average of 15 days, in the period between April 5 and April 30. In other words, the number of cases doubled in less than three days before mitigation measures were put into place. In contrast, after mitigation measures, the number of cases took more than two weeks to double.

But while doubling time increased in all states, the rate of increase varied. On average, the 45 states with stay-at-home orders in place added about 12.27 days to their doubling time, indicating significant slowing of disease spread. Meanwhile, the five states without stay-at-home orders—Arkansas, Iowa, Nebraska, North Dakota, and South Dakota—added only about six days to their doubling time, and four of these states exhibited some of the worst doubling rates in the nation.

“We hope that these findings contribute to a growing body of evidence aimed at studying the full course of COVID-19 in America,” said Joe Silva, a Ph.D. student in the School of Public Health and lead co-author on the study. “This study does not imply stay-at-home orders were the sole factor that drove the observed increase in epidemic doubling time, but the data may be representative of the impact of multiple public health measures.”

As the researchers published their findings, they did so aware that the U.S. is far from having successfully addressed the COVID-19 pandemic, he added.

“Our study period included data through the end of April, and since then cases have increased beyond what was previously thought to be the peak of the pandemic within our borders,” Silva said. “During this time, states have also removed stay-at-home orders, and it will be just as important to study the potential impacts on disease spread after these measures were no longer in place.”

In addition to Lurie and Silva, other authors on the study were Rachel Yorlets, Jun Tao, and Philip Chan.