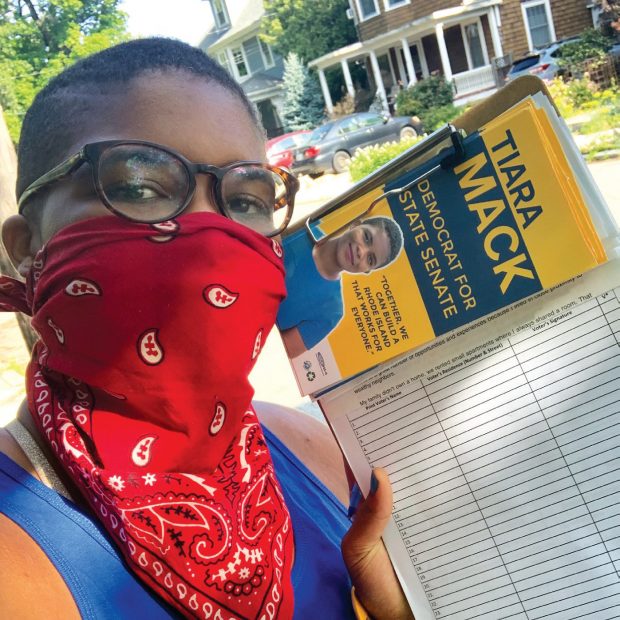 She was a longshot. Her opponent, Democrat Harold Metts, had served in the Rhode Island State Legislature since 1985, nearly a decade before Tiara Mack ’16, was born. When she announced her candidacy, few believed the Black Southern queer woman would upset the longtime incumbent in the primaries. But not only did Mack beat Metts with 60 percent of the vote, she went on to defeat independent Kevin Gilligan in the general election with nearly 90 percent of the vote, becoming the first openly LGBTQ Black person elected to the Rhode Island state Senate; part of a rainbow wave of hundreds of LGBTQ candidates who won elected office in November of 2020.

“When families don’t have to worry about how to pay rent, where their next meal is coming from,” she said, “they can more easily focus on their health and communities.” She is also a champion of the Green New Deal, a policy she views as urgent for Rhode Island, which loses about an inch of land to rising seas every eight years.

Mack’s political journey began at Brown University, where she was a public health concentrator. “It was through public health that I learned how to focus on community needs and narratives to understand the best pathways to improve all aspects of life,” she said. “Housing, healthcare, and wages are all connected to what opportunities people can access that lead to better health outcomes.”

While at Brown, Mack taught sex education at local high schools, and volunteered and interned at Planned Parenthood and the Women’s Health & Education Fund of Rhode Island.

In 2019, she testified with other women on behalf of the Reproductive Privacy Act, legislation that codified Roe vs. Wade into Rhode Island law. The experience introduced her to her future opponent, Harold Metts, one of several Democratic senators opposed to the legislation. When Mack sent him a postcard urging him to reconsider his stance, he sent her a letter citing Bible passages and saying he would not “support abortion bills.”

For a year, Mack knocked on doors in the largely Latino District 6, talking to residents, introducing herself as “Tiara Mack, a queer Black, formerly low-income educator and activist,” she told NBC News.

“All of those identities are political, whether or not we see them,” she said.

Mack thinks people voted for her because voters “value people who are firm in their beliefs and who are not going to back down.”