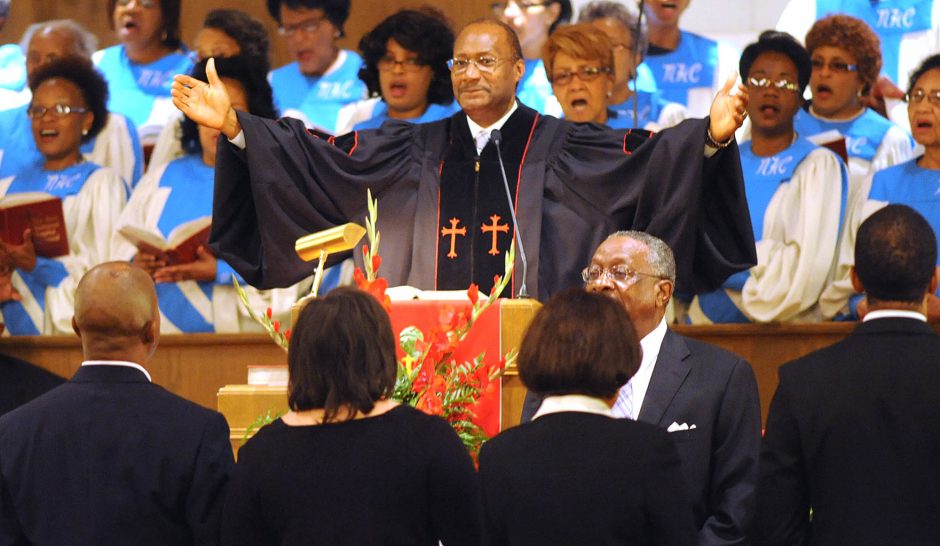 Amy Nunn is collaborating with Black pastors to change assumptions and spread information on access to medical care.

When Amy Nunn ScD, MS, professor of behavioral and social sciences in the Brown School of Public Health and professor of medicine at The Warren Alpert Medical School, looked at the problem of COVID vaccine hesitancy in the Black community, she made no assumptions.

She knew better than to assume from her work as the director of the Rhode Island Public Health Institute, which focuses on conducting applied research to develop solutions to public health challenges. That includes a program of tapping into the influence of Black pastors to push HIV prevention, testing and treatment campaigns, an initiative she started on long before becoming a tenured professor at Brown.

“Black pastors often get a bad rap because of the historic baggage associated with homophobia and human sexuality,” she said, adding that the stereotype of “they’re all AIDS denialists” is just flat out false given her experience working with more than 350 Black pastors on this specific issue.

“It’s the wrong starting place. If scientists did a better job of getting community members involved in the process, we would get a lot further along.”

Nunn grew up in Arkansas and after graduating from college, was a Fulbright Fellow, of which there are only 800 in the U.S. a year. She started her professional life in politics: in 2001, she became the Hispanic Outreach Coordinator for Arkansas Sen. Blanche Lincoln.

After finishing her MS and ScD in global health at the Harvard School of Public Health, she completed her post-doctoral fellowship at Brown’s Warren Alpert Medical School.

When Nunn considered the best route to tackling public health problems, particularly the high rates of HIV in Black urban communities, she thought back to her time in Sen. Lincoln’s office. While her primary job was working with the Hispanic community, she also got to know Black residents, and made connections with Black churches and Black pastors.

“If you want to get something going with the Black community, you often work with churches. I learned how to do that when I worked for a U.S. Senator,” she said.

Working With the Community

The U.S. sees nearly 38,000 new HIV infections a year, according to the Centers for Disease Control and Prevention. While that may look small on a national scale, and encouraging since the rate of infection has dropped more than two thirds since the height of the epidemic in the mid-1980s, HIV infection rates in some urban neighborhoods are higher than in many Sub-Saharan African countries. Since 2014, the overall U.S. HIV infection rate dropped to 13.3 per 100,000 people but remained stubbornly high and flat for Black Americans at 45.4 per 100,000.

Testing resistance is part of the problem for Black gay and bi-sexual men, rooted in stigma, homophobia and discrimination, which had historically been perpetuated by churches. This may mean it’s difficult for some men to be open about their sexuality and therefore see themselves as someone who is at high risk for HIV and should be tested regularly.

Gay and bisexual Black men of all ages also face economic barriers to getting medical care, creating a situation where they may be unknowingly infected and not receiving treatment. They also may not have access to pre-exposure prophylaxis (PrEP), a medication that prevents HIV infection from sex or injection drug use.

That’s where Black churches come in.“Historically, the Black church has been a conduit for everything in Black families,” said Tony Yarber, former mayor of Jackson, Mississippi and pastor of the Relevant Empowerment Church. That influence can be a double edged sword. “The Black church is partially responsible for why Black folks have been averse to testing and the type of lifestyle changes necessary to prevent the spread of HIV. It makes sense that the pulpit is being used to spread the word of the importance of testing and how that and treatment works.”

Nunn started in Philadelphia, linking Mayor Michael Nutter’s Office of Faith Based Initiatives to pastors of Black churches around the importance of using their role and influence to reduce the high rates of HIV in the city.

In 2011, she formed Philly Faith in Action, a coalition of more than 60 Black clergy members, all committed to promoting HIV testing, fighting AIDS stigma, and ending racial disparities in HIV infection in Philadelphia. In 2012, she launched a related campaign called “Do One Thing, Change Everything,” which worked with community leaders to encourage residents to get tested for both HIV and Hepatitis C with the goal of identifying undiagnosed cases and linking those who test positive to care. The plan included a marketing campaign, block by block testing, and partnerships with local federally qualified health centers, but relied heavily on community leaders, including Black clergy to get the message across to their congregants about the importance of testing and care.

Taking Philly’s Success on the Road

That success in Philadelphia has being replicated through the Rhode Island Public Health Institute’s national Faith in Action program, which has worked with more than 350 Black churches across the country.

That includes Jackson, Mississippi. HIV prevention and treatment isn’t just a community effort but a personal one for Yarber, whose sister and nephew died of complications of AIDS in 1991.

“The funeral directors would not allow you to touch the bodies of folks who died of AIDS because they thought they were still contagious,” he said. “I still remember them making a big announcement at the funeral home not to touch the body.”

Perceptions and stigmas have changed, particularly in Black churches. They want their members to get tested, to know about treatment options, and that being HIV positive is not a death sentence. “We can tell people that even if you have a positive diagnosis, this isn’t 1985. There’s an opportunity to live a very long and prosperous and healthy life,” he said. “Black churches have to really understand that hey can be impactful. If they know that, then they’ll be more inclined to engage.”

Nunn, he said, is “phenomenal at getting the right people to the table. We would get on these calls and she would just say Hi, and then we’d run the call. I’m being funny but she was amazing at delegating and facilitating.”

The Faith in Action program also includes training Black churches have to really understand that they can be impactful. If they know that, then they’ll be more inclined to engage. Tony Yarber, former mayor of Jackson, Miss. and pastor of the Relevant Empowerment Church the next generation of HIV researchers, a program that is funded in part through a grant from the National Institute of Mental Health. It focuses on conducting research on reducing racial disparities of HIV outcomes in the Southern United States, which is the source of 51% of HIV cases annually, according to the CDC. Since 2008, the program has trained 40 investigators, and in the last five years, its fellows have written 480 peer reviewed articles and funded 52 grants.

Nunn believes that the combination of research and on the ground work is why these initiatives have been successful, and why new researchers are being trained about these methods. “If you don’t have action, you don’t get a lot of community buy in. I like applied work. I’ve always just done the two together and it’s worked well,” she said.

From HIV to COVID

Nunn is using her expertise and experience, and lessons learned on working to end the AIDS epidemic, on COVID-19, which has disproportionally affected communities of color. Black Americans contracted COVID-19 at nearly three times the rate of white Americans and were nearly twice as likely to die of the virus, according to data from Johns Hopkins University.

It’s also had a deep impact on Black churches and their ability to function as centers not just of worship but for community life. “Churches have been crippled by COVID as much as restaurants. They can’t worship,” said Nunn.

Even if they’ve been holding virtual services, it’s not the same. “They’re overwhelmingly willing to take on COVID. They want to host testing events and they want to help with vaccination campaigns.”

While much has been made of vaccine hesitancy and medical mistrust in the Black community, the unwillingness to receive COVID-19 vaccines has not played out. According to the polling company Civiqs, 56% of white Republicans said they were either unsure or would not take the COVID-19 vaccine if it were available to them, compared to 31% of Black Americans. Yarber said that as of mid-April, all of the elders in their church have been vaccinated, and in an informal poll of members ages 20 to 45, almost all plan on being vaccinated.

Instead, access to vaccines has been a greater issue. As of early April, the vaccination rate among white Americans was 1.6 times higher than the rate for Black Americans, according to the Kaiser Family Foundation.

Nunn is working with the Mississippi Department of Health on a community mobilization and marketing campaign with Black churches to promote vaccine uptake and increase awareness of how to be vaccinated, and in some cases doing COVID testing and vaccine clinics in churches themselves.

“Everyone thinks that the medical mistrust people of color have would translate into vaccine hesitancy, but I haven’t seen it at all. In my survey of pastors, they’ve told us they want to help and get involved. They want to get back to church, and they know that COVID testing and vaccines are the most important steps they have to take to do that,” she said, adding that, just like with the assumptions that all Black pastors are homophobic, that “we should stop stereotyping communities of color as vaccine hesitant. In my experience, pastors usually want to promote vaccine because they have lost loved ones, officiated over funerals, and lost many of their elders. I’m an eternal optimist about working with African American community leaders. I know we can do this!”