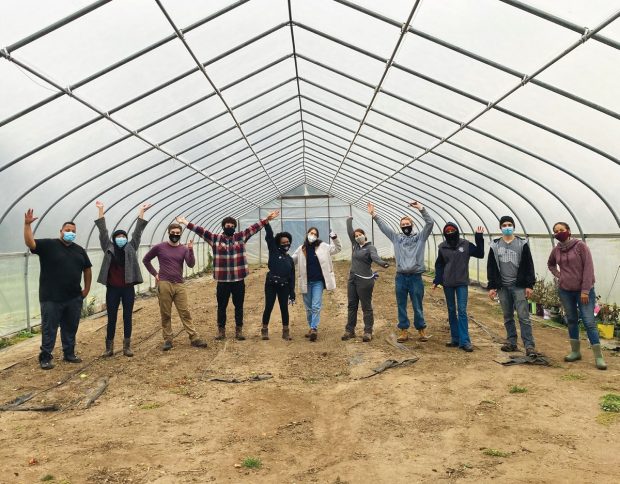 Back to the Land

Summer Gonsalves MPH’19 is a member of the Narragansett Indian Tribe and an advocate for environmental justice.

Whether she’s volunteering on the Narragansett Tribal farm, helping out local community gardens, guest lecturing at a local school, attending a board meeting, surveying community members, or hosting a workshop, Summer Gonsalves MPH’19 is always building relationships with communities impacted by environmental contamination. In her role as co-leader of Brown University’s Superfund Research Program Community Engagement Core, she collaborates directly with a dozen organizations across Rhode Island around conservation, education, advocacy, and environmental justice.

“The brunt of my work involves figuring out what issues are impacting different communities, based on their relationship with the land, and seeking solutions together to overcome these burdens,” Gonsalves said.

For some, this includes soil sampling analysis and creating remediation plans, for others it involves developing hands-on educational workshops for youth. “The work we do provides a lot of opportunities for systematic growth,” she said, with “academics, government, and communities coming together collectively to work through environmental injustices.”

Gonsalves works with numerous diverse communities to address the impacts of environmental contamination on their health, but connecting almost all of them, is their relationship with food systems.

“When I first came into this role, I was focused primarily around food sovereignty with the Narragansett Indian Tribe,” Gonsalves said. In fact, her 2019 thesis project for the Brown MPH examined food security and health outcomes among members of the Tribe.

“Food has historically been used as a weapon,” Gonsalves said. “First through starvation tactics, then through the breakdown of food systems that groups relied on. From there, the implementation of the ‘western diet’—foods that are calorically dense, high in fats, and low in nutrients—has led to diet-related diseases. In essence, the foods we eat are killing us slowly.”

Gonsalves points to the Commodity Boxes of the 1960s—the food boxes distributed by the U.S. Department of Agriculture to tribes in an effort to improve food insecurity—which were filled with canned and prepackaged goods.

“From these boxes, our relationship with food began to change. New laws and regulations emerged requiring licenses to hunt, fish, and shellfish. Lands once used to forage and hunt on were now being sold privately, with access to them no longer attainable. Family size started to decline, and fast-food restaurant chains grew. We started to move less and acquire more. In exchange for the land taken from us, the government gave us cardiovascular disease, diabetes, cancers, obesity, and other comorbidities, through the form of a food box.”

Inspired by the findings of her MPH thesis and determined to turn the idea of Commodity Boxes on its head, Gonsalves created Of the Earth Harvest Boxes. The program delivers seasonal, locally-sourced produce and meats to members of the Narragansett Tribe each quarter. Most of the foods offered are traditional to the Narragansett diet and, in addition to reducing food insecurity, also aim to reduce health disparities.

According to Gonsalves, the earth—the land—to Native Americans, is seen as central, rooting people to their ancestors. Historically, the lands taken from Native tribes were bountiful and productive and were transformed into farmlands. “The lands we were left with were barren and desolate swamplands, or lands not able to sustain productive food systems,” Gonsalves said.

Today, in our cities and towns, marginalized, minoritized populations suffer a similar injustice, relegated to areas with less green space and more contamination.

“We live along highways, next to industrial lots, with higher concentrations in urban areas,” Gonsalves said. “This is where my role comes in. In most instances, community members are not even aware of the level of contamination surrounding them or how it impacts their health. By raising awareness, we can seek solutions, together, to mitigate our relationship with the land and food around us.”